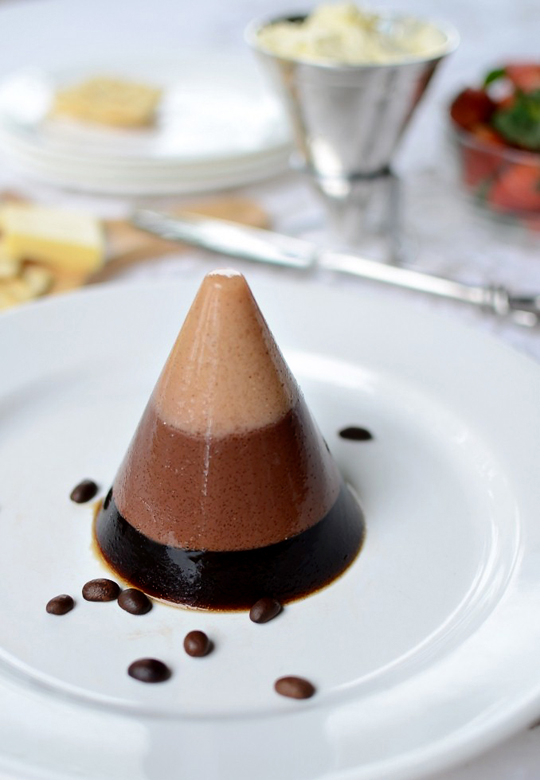 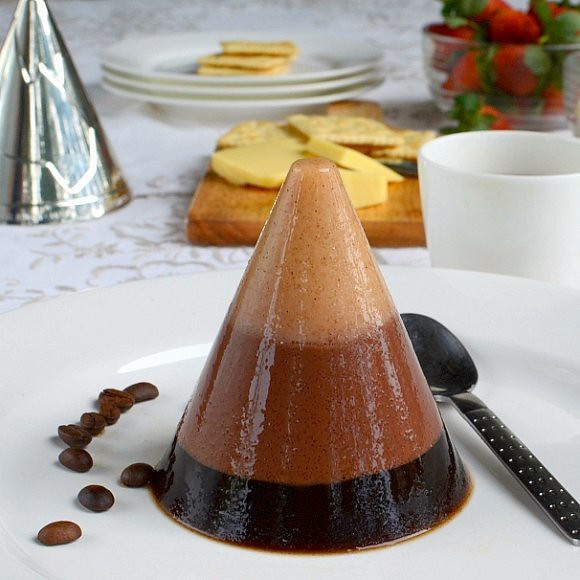 When I was growing up, kids didn't have birthday cakes because nobody had ovens and there were hardly any bakeries in town (this was Borneo remember). I don't know what other families did about birthday cakes but my mom made agar cakes for our birthdays. Mom's agar cakes were made in a round metal bowl with Ovaltine or Milo, and sometimes with fresh coconut milk. Match sticks were used instead of candles, a sign of Mom's creativity. Simple as they were, we loved those agar cakes. Kids then weren't showered with presents and constant encouragement. An agar birthday cake and a whole chicken drumstick (on non-birthdays, the drumsticks are chopped up to share) and I was the happiest person in the world. Our wants were that simple. Mom doesn't even remember those agar cakes now but my siblings and I do.
The agar I'm posting today for Royal Selangor Pewter's Jellyriffic! challenge is inspired by my mom's agar cakes and by the tri-color coffee or tea lattes you can still order in hotels and country clubs. I've used three main beverages: coffee, tea and cocoa, all of which are grown in Sabah.

In my previous life as a banker for a development bank, I had to learn all about the physiology of cocoa and the cultivation of it and visit the plantations on the east coast of Sabah. Unfortunately for Sabah, the golden crop of the 80s and 90s was very susceptible to diseases and has since been replaced by the hardy oil palm. If you've never seen a cocoa tree before, here's a photo I took this afternoon of a tree in my neighborhood: 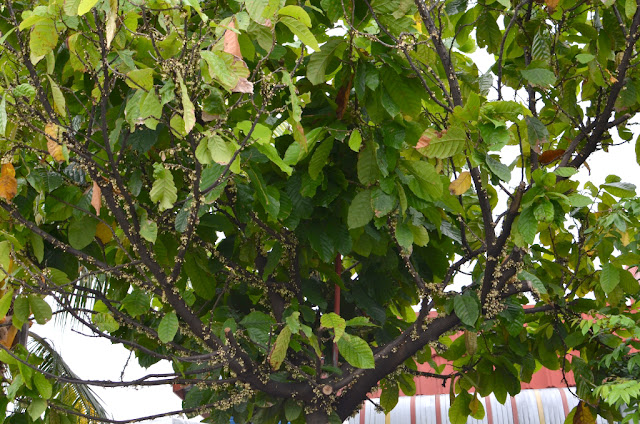 There are so many flowers on the branches of this cocoa tree that it looks like it is infected by some kind of fungus.

I went to the market today to get fresh grounded coffee and the aroma was just wonderful. For many Sabahans, only thick Tenom coffee makes the cut which is why coffee shops are thriving while Starbucks and other chain coffee companies aren't doing well here. Sabah Tea is grown on the highlands of Mt Kinabalu. If you have been to Sabah, chances are you've grabbed a few packets of Sabah Tea to bring home. 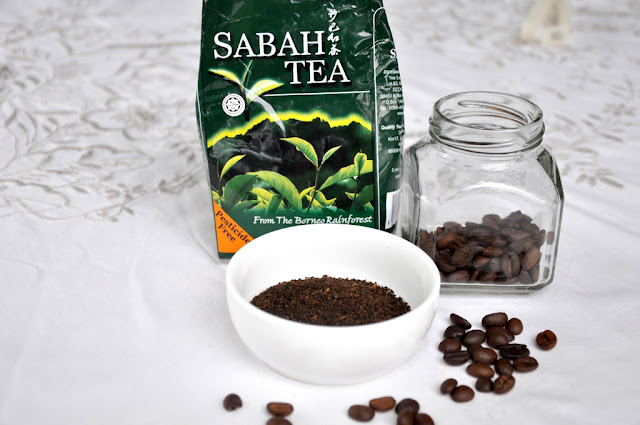 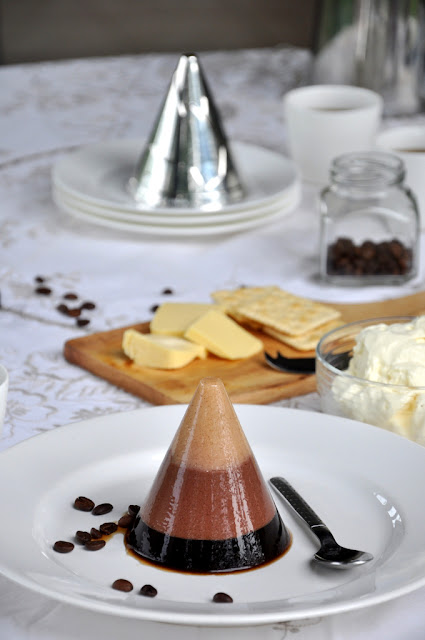 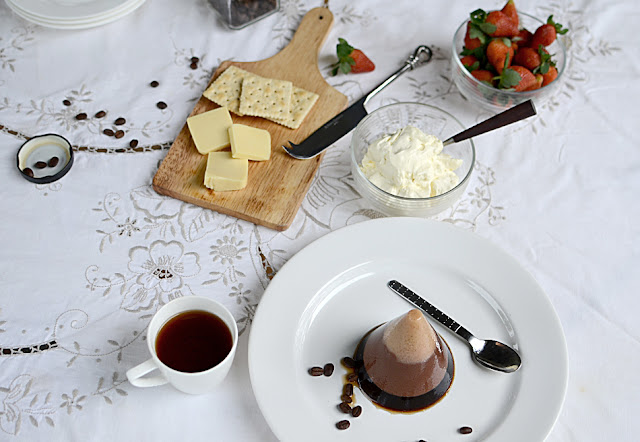 This is an easy jelly to make and the ingredients are found in most kitchens. The top layer was made with tea and cream (or even better, fresh thick coconut milk), the middle layer with cocoa and cream (or fresh thick coconut milk) and the last layer was plain strong coffee. I wanted the black coffee to stand out but you can add cream (or you know what) if the graduation in colors doesn't matter to you. Update: a reader suggested using gula melaka and that's a great idea because gula melaka tastes better than ordinary sugar. Thanks, Fieee, and I changed the name of this agar to "3 In 1" because of your comment.

My daughter (who's back for a visit and gave me a crash course in Photoshop) and I set the table on our patio for the photo shoot this afternoon. We sat down after the shoot, dug into the agar and were delighted with it. The agar was firm and the flavors of each layer, though distinct, went well together. The extra cream was not even needed. The agar is quite firm and needs to be cut up for serving and eaten with a fork so use gelatine powder instead  if you are going to eat it with a spoon.

Coffee, tea or cocoa or all three anyone?
3 In 1 Jelly


Top Layer:
50 ml water
1/8 tsp agar powder (very firm agar)
1/2 tsp (or more to taste) caster sugar
a large pinch of ground Sabah Tea
1 tsp of dairy cream (or 2 tsp thick fresh coconut milk)
1. Make tea with the water, sieve to remove the tea leaves. Put the tea into a small pot. Mix the agar powder and the sugar well and add to the tea, stirring well. Heat until the agar and sugar is dissolved. If the agar is too thick, add a tbsp of water. Remove from the fire, stir in the cream until well blended. Work quickly because agar sets almost instantly.
2. Rinse and place the Nick Munro jelly mould into a mug. Pour the tea agar jelly through a sieve into the mould. You can work on the next layer straightaway as the agar sets quickly.

Bottom Layer:
1/2 tsp agar powder
2 T sugar (or to taste)
2 to 3 tsp coffee powder + 120 ml water
1 tbsp dairy cream (omitted in the photo jelly; or use 2 tbsp thick fresh coconut milk)
1. Mix the sugar and the agar together well. Heat the water until boiling, remove from heat and add the coffee powder. Stir well, leave to develop the flavor.
2. Sieve the coffee into a small pot, sprinkle the sugar-agar mixture over and heat to dissolve, stirring well. Remove from heat and add the cream, stirring well. Pour onto the middle layer. When cool, leave to chill in the fridge.

Note: I made this agar very firm to last the photo shoot and also because we like the bite of firm agar. If you prefer a softer agar, reduce the agar powder by half or less than half. Agar is using eaten with a fork or even hands. If you prefer to use spoons, substitute the agar powder with gelatine powder, using the same amount for a firm jelly and reduce it for a softer one.