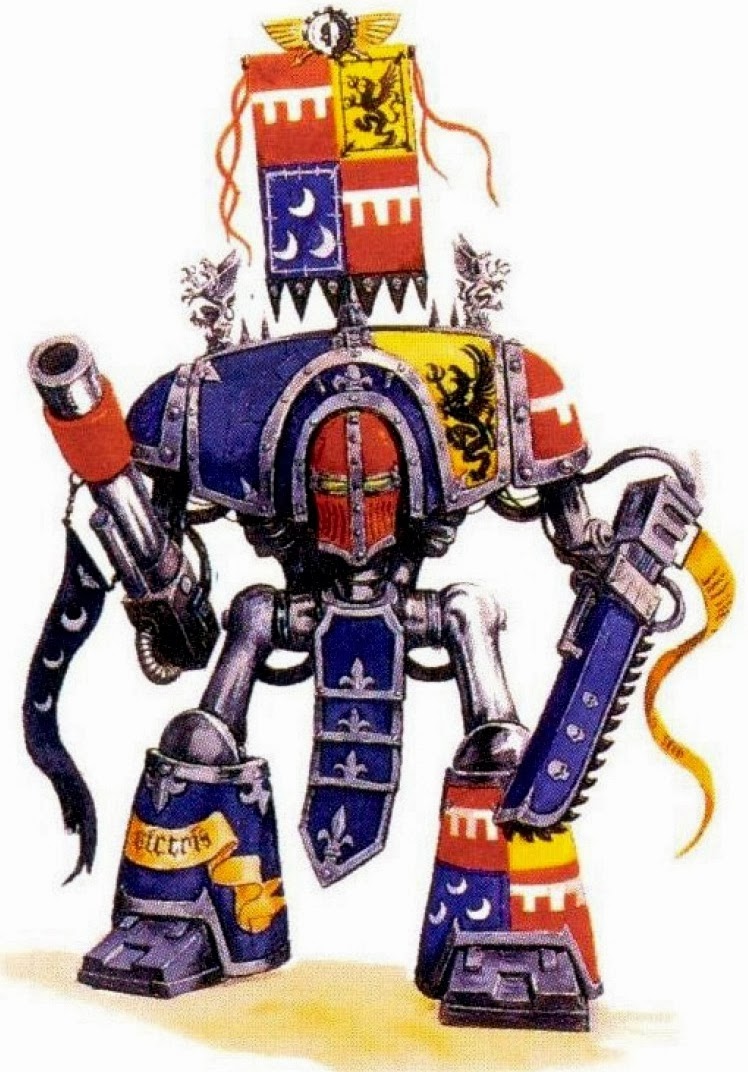 Ok a lot has dropped about knights in the last 24 hours.  Big one being that a store somewhere is taking orders.  There are also supposed stats for them.  First these are two different sources so don't confuse one rumor with the other.  I think one is an accurate one, while the other is suspect.


So on the preorder rumor.  Well I was not too sure on it, anyone can say a random store somewhere is taking orders.  So I called up my local FLGS and asked them if they were taking any preorders for Imperial Knights.  The answer I got was interesting.  I was told that nothing official had been released or announced yet, but he wanted to know if he should put my name down.  Interesting.  So I have my name down and will see in the next day or two what comes of it.  So expect to see a lot more info on knights in the next few days.  The whole preorder thing seems to be legit, I recommend contacting your FLGS if you want one.

The other rumor on the stats comes from 4chan.  So yeah, I immediately take a lot of salt with this rumor.  Basically its a super heavy walker with 13 AV and SM stats.  Ugh, not what I want to hear.  Really do not want to see this be a super heavy.  One if you look at scale, its about the size of a wraith knight, if not a little smaller.  So there really is no reason to make this a Super heavy, except GW.

This is from 4chan so that is my consolation.  I don't think this will be an accurate rumor, its 4chan and they are trolling as usual.  We'll see but I am still hopeful that they won't be super heavies.  While talking about knights, there is a great wiki page here that covers them.

Their weapons that knights have is a Battle cannon ala leman russ.  A chainsword, power fist.  A thermal lance, which kinda is described as almost a flamer melta thing.  They have lascannons, autocannons, and a quake cannon (which is not a D weapon).  They also have access to a power lance, which is basically a lightning spear.  Besides the quake cannon, there really isn't anything that screams super heavy.

Its a good mix of ranged and combat weapons and they have their standard middle of the road classes as well as support and close combat.  It will really be interesting to see what they come out looking like.  The shock lances are cool, will be interesting to see how they integrate that, maybe a bonus to attacks in CC, maybe hammer of wrath, who knows.

Any ways I thought I would share.  I really thought my stores answer was interesting and I suggest you give yours a call.

On another note, I found out what my wife got me for valentines.  I am going to the Golden Throne GT!!!  I was quite surprised when I found out, but I am happy as I can be.  Now I better get practicing! Guess I picked the right one :).

Hope your week is going well and may knights be in your future.