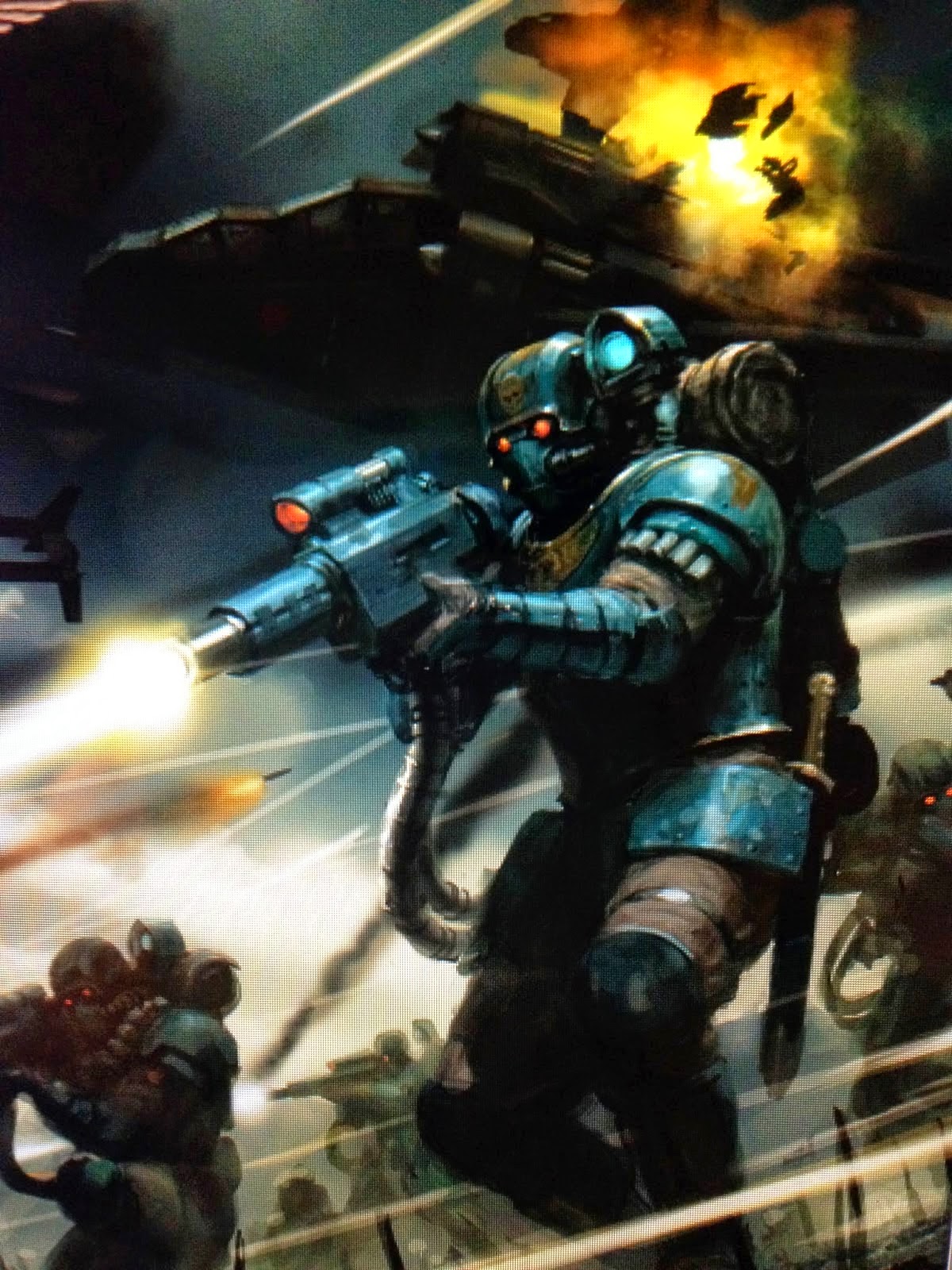 Time for the last imperial guard elites choice.  Well I have covered these guys pretty extensively but it is important to do a consolidated look at them, especially at the standard ones out of the AM book versus MT.  Personally these are your most useful elites choices, they bring the most utility and being able to be taken as a platoon means you can take a lot of these and still have room for other elites choices.  Granted the IG elites aren't must take units, but these guys come in as just about there.

As a choice, you have a minimum of one Scion squad, with up to three max and a command squad as an option.  So for one elites choice you can take 4 squads.  They all start out at 5 man units, with 70 base for the standard squad and 85 for the command.  They are 12 ppm and you can have up to 10 in a standard squad.  They all have carapace armor, hot shot lasguns, frag and krak grenades, move through cover and deep strike.  The squad leaders have pistol and ccw instead of lasgun.  The command squad is similar except that the Tempestor Prime has an I of 4 and 2 Wds.  Option wise the standard squad can take two special weapons, melta gun, plasma gun, volley gun, grenade launcher, and flamer.  The squad can also take a vox for five.  The tempestor (sgt) can take a power weapon or fist, and can take a bolt pistol for free or a plasma pistol for 15. Always take a bolt pistol!  The hot shot pistol has only 6" range and is just about never able to get a shot off because of this.  The bolt pistol is just more useful.  The tempestor prime can take the same options.  The command squad can take up to 4 special weapons and has the normal platoon upgrades that you should not bother with, they're best as a gun unit.

There are a lot of ways to take these guys and few that work well is in MSU (multiple small units).  Taking 4 five man squads and either throwing them in transports (AM scions can take Chimeras), vaklyries/vendettas, or deep striking them is a great option to get lots of special weapons up the field in a relatively durable package.  For deep striking, meltas are just about perfect, having a platoon with a bunch of meltas drop in to lay waste to vehicles or heavy infantry.  This also works well for plasma gun spam, giving each sgt  a plasma pistol and two plasma guns in a squad gives you a lot of firepower that you can drop where its needed.

You want to keep them relatively close to the command squad if you take one as it provides an 18" bubble of leadership as the squads get to use the tempestor prime's Ld9 if within that range.  Because of this, I would take a scion squad an command squad as minimum choices.  You can do this three times for 6 squads and have a lot of guns and orders plus high leadership.  This is a good force that can deep strike with lots of small squads that can do a lot of damage and be enough of a thorn that your enemy will have to devote a lot of fire power to get rid of.  Having 6 squads means at least 6 units will try to have to kill them, not shoot at the rest of your army.

They also work really well as a mechanized strike force.  Personally I prefer taurox primes for this, they have BS 4, good weapons,and are fast, plus automatically reroll failed terrain tests, which for me is enough to put them above chimeras.  Chimeras are good if you want a sturdier, yet slower advancing unit.  Use them as a concentrated force to hit a flank of your opponent and overwhelm them with fire.  The great thing about 7th as well is that they can score as well, giving them great opportunity as not just an objective clearer, but an objective taker.

As an aerial assault force they also excel, having move through cover means they do not take dangerous terrain tests if they scatter jumping out of valkyries/vendettas, giving a big edge over veterans in this role.  These can be full sized squads or small ones, and the great thing is that they are still small enough to fit inside vendettas and pack a punch.

The big difference between these guys and the MT scions is orders, and they really change what they can do.  MT scions can take on anything, and are very good at killing MCs and vehicles, as well as hurting higher toughness units.  AM scions don't fill this role.  Instead they are a better general purpose unit and with first rank fire they can take horde units on much better than MT scions.  They are actually much better at taking on T4 and less infantry and work well in this role.  They also are a little more mobile, being able to shoot and run and make use of move move move, plus get back in the fight from senior officers.  Fire on my target is also great on units that have a 3+ save but are dug into cover, or really any infantry unit that is in cover.  Bring it down is not as useful, with the exception on melta armed scions.  Take aim and suppressive fire are also good, giving them either pinning or precision shot.  Take aim is good if there is a 2+ save tank up front but worse models behind, though you still need to roll 6s to hit to make use of this.  Pining is all around a great thing to make use of and is another order to use against advancing units.

When you are taking them, figure out what role you want them to fill.  If its anti infantry then bring volley guns, or flamers/grenade launchers and take them out.  If it's heavy infantry then go for plasma guns, if anti-tank then go for melta guns.  The key for them working well is to figure out what you want them to do and then build the platoon around that.  And they work really well in a platoon.  A token squad is find, but when taken in numbers they can support each other and provide a high threat to your opponent.  They are a great option and can do a lot of damage to your opponent when they are least expecting it.  I will say though, they need mobility so your choices are to either deep strike them, put them in a flyer, or put them in transport, as their short range will hurt them if left on foot.