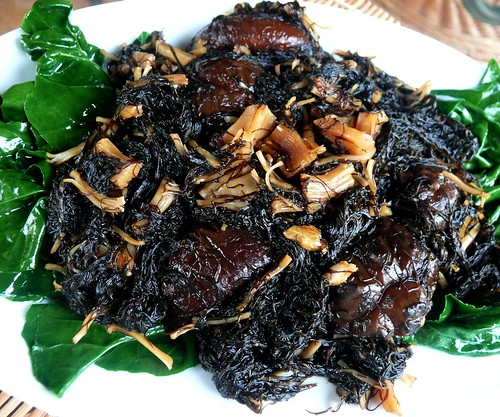 I look forward to eating Chinese New Year's 2nd Day dinner at Chin Aunty's, my MIL's best friend. Chin Aunty is Cantonese and cooks like a true Hong Konger, so there are always plenty of delicious dishes at her house on CNY. One dish I love is a simplified version of the fatt choy dish, you know the one with 8 ingredients like dried mushrooms, dried oysters, fatt choy, sea cuke, roasted pork, gingko nuts, fish maw and red dates. I like her simplified version because after the reunion eve dinner and the CNY Day 1 dinner, it is a refreshing change from eating rich and meaty dishes.
Trivia: Do you know that in China Chinese New Year (CNY) is known as Spring Festival (chunjie)? I received some messages from friends in China and they all call it that. I thought about it and it made sense. I think CNY was termed for non-Chinese. You wouldn't say " zhong guo nian" but just "guo nian" or "nong li xin nian", just as you shouldn't say English New Year or Malay New Year. Just thought you should know. 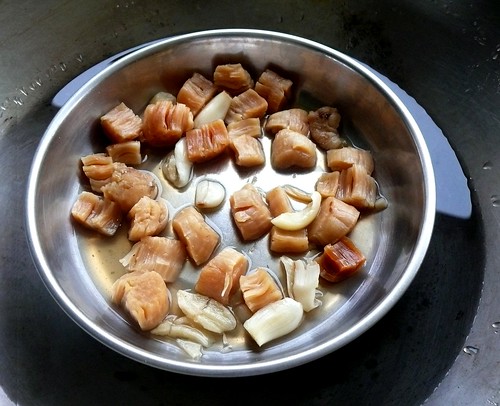 1. Steam the dried scallops with the wine, garlic and water it was soaked in, for 20 minutes.

2. Put the mushrooms, soy sauce and sugar (you can add some oil but I don't) in a small pot with just enough water to cover, and simmer for 30 minutes or until mushrooms are very tender. The water would have been reduced to half or less.

3. Blanch the kailan in boiling water to which 3 T oil and 1 t salt has been added. Remove quickly (I like my veg quite raw and crunchy but it's up to you) and drain.

4. Add the steamed scallops and fatt choy to the mushrooms, increase the fire to medium and cook 2 minutes to heat through (not too long or the fatt choy will break up), then increase the heat to high, add the oyster sauce and then the cornflour solution. Taste and season if necessary. If you like it darker, add some dark soy sauce.

5. Pour mushrooms fattchoy onto a dish and arrange the veggies around it. YUM!* or if you prefer, use the more auspicious-sounding hoe si (dried oysters). Soak and wash it well, then add to the mushrooms in Step 2 and cook until just tender.