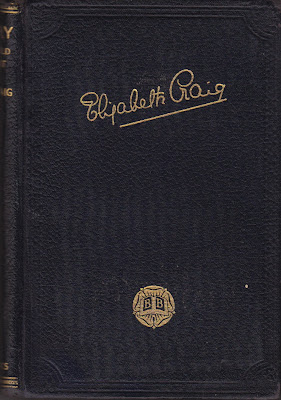 Elizabeth Craig was born in Scotland in 1883. She published her first cookery book in the 1920’s and her last in the 1980 when she was 97 years old. There is a famous story about Craig that I am sure I told you before, but it is worth repeating. Craig broke a hip and was lying in her hospital bed when her publishers suggesting that someone else should finish her next book. Craig would have none of it and has her notes brought into her and she finished the book by herself in the hospital.

You can’t keep a good woman down.

In fact, Elizabeth Craig wrote over 70 books on cookery and household management. She began publishing cookery books after the end of World War I when rationing was in effect and food items were often scarce. By the time her career ended, food was abundant and every home held a refrigerator. Her writing reflected this change in society.

In her two volume set, Cookery and Household Management, Craig offers up over 1000 recipes for entertaining and dining. Volume 1 is loaded with over 1000 recipes and Volume 2 offers up more recipes with household advice and management. The recipes in Volume 2 act as a kind of specialized instruction. There are recipes to lose weight, recipes for feeding invalids and one for feeding children.
There is a chapter on local (British) foods and a special selection of Jewish cuisine. There is wonderful chapter on The Empire Kitchen – food from Australia, Canada, New Zealand, India, South Africa and the West Indies, and though there is no true “Empire” left, it is fun to look at these disparate areas lumped together in a section of recipes.

I rather like this recipe because of the title, Shrimped Tomatoes. True, they are just tomatoes stuffed with shrimp, but stuffed tomatoes with shrimp just doesn’t have the cache of “Shrimped Tomatoes.” It is probable important to point out that the shrimp stuffing these tomatoes are brown shrimp, tiny little shrimp you don’t find too much in America. Americans like “jumbo” shrimp which a proper Empire Kitchen would refer to as a “prawn” which is technically or should I say biologically different from a shrimp as they belong to different suborders of Decapoda, but I digress…

Cut the tomatoes in half and remove some pulp. Add the breadcrumbs and shrimp to the beaten egg, then place the mixture on each half tomato. Cook in a moderate oven until the tomato is soft.