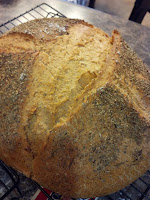 Last week, I was working on my final book, “Dutch Oven Breads”, and I got to the chapter on “Getting Creative”.  After all of my instructing and pontificating on bread making, I finally offered some suggestions on making your own bread recipes.

It turns out that almost all bread is the same at it’s core, and that you take the same basic ingredients, you can simply add a variety of enrichments to create an entirely new loaf!  Then you can name it and call it your own.

So, to test that theory, I took a core recipe and made two completely different variations.  From the same base, each finished loaf was a unique texture and taste.

To read about all of my ideas and suggestions for enrichments, you’ll have to get the book!

More oil, basil, and oregano for the topping.


The first thing I did, about an hour before making this recipe, was to mix the oil and the herbs in a small bowl.  Actually, I used a ramekin.  It was the right size, and it was handy.  I let it sit so that it would release the flavors of the herbs into the oil.

Then, a while later, I mixed the yeast, water, and sugar, and let that set for a while to get all frothy and yeasty. While that was proofing, I prepared the other ingredients.  I sifted in the flour, added the salt.  Finaly, I added all of the ingredients together, the oil/herb mixture, the yeast mixture, the dry ingredients, the tomato paste and the egg, and stirred it up.

I turned it out onto the floured board and started kneading.  Right away, I could tell that the texture would be different.  It was much more moist than I thought it would be.  I didn't anticipage the extra liquid from the tomato paste.  But, as I kneaded and added more flour, it turned into a nice dough ball.  After a while, it gave me a good windowpane, and I set it aside to rise.

It actually rose up very nicely, and I let it go a bit bigger than I usually do.  When I decidd it was done, it had a rich smell, just like a great tomato sauce.  Finally, I punched it down and re-rolled it into a boule.  I sprinkled about a teaspoon of additional basic and oregano onto a plate and spread it around.  Then, I brushed the top of my new boule with olive oil.  Finally, I turned it over onto the herbs and pressed the dough onto the plate.  When I rolled it off, there was a nice coating of shredded herbs stuck to the ball.  I put it, bottom-down, into a well-oiled bowl, and let it sit to proof.

Right away after that, I went outside and lit up some coals.  When those were nicely white, I placed an oiled 12" Dutch oven on and under the coals as enumerated above.  I let that sit to pre-heat for about another 15 minutes.

When the bread had fully proofed, and the Dutch oven was hot, I took the bowl with the boule out to the oven.  I lifted up the lid, and then, with my hands, carefully lifted the doughball out of the bowl and into the oven, herb-side-up.  I sliced it with an "X", and closed up the lid.

About 15 to 20 minutes later, I turned the Dutch oven, and lifted the lid just quick enough to insert the thermometer.  I was hit with this wafted wave of delicious tomato smell.  It was amazing!  I knew this one was going to be good.

After another 20 minutes or so, I checked and it was done.  The thermometer read about 200. I brought it in, and turned it out onto a cooling rack.  The smell was wonderful.  Later that evening, as we tasted it with marinara pasta and meatballs, the meal was complete! 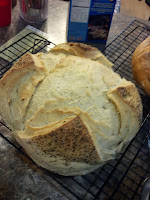 Here's another bread I did, actually, on the same day, and at the same time as the Tomato Bread.  This was inspired by my good friend Omar Alvarez.  He's an amazing Dutch oven chef in his own right, having won the World Championship Cookoff a few years ago.

He emailed me his recipe after posting pictures on his facebook page, and I really wanted to try it.  I saw that it was really close to my core recipe!  So, I just adapted it!

More oil and black pepper for the topping

The process is essentially the same as the recipe above.  I baked them that day side-by-side!  Start by letting the oil steep the garlic and the black pepper (what an aroma THAT is!).  Then, proof the yeast, and mix in the other ingredients all together.  Knead it until it stretches into the windowpane, then let it rise.

In this case, I also coated the top of the loaf with more ground black pepper, just like I did the herbs in the tomato bread.

The coals were heated as the bread proofed, and the loaves baked side-by-side.

I actually liked the subtleties of the garlic even more than the tomato.  But they were both delicious and so unique and different.  The whole experience just showed how easy it is to make a loaf of bread that's brand new!

Here's another great, but strange, example of Dutch Oven Cooking, with Dandelions, and more about what to cook in a dutch oven.

Mark has discovered a love of Dutch Oven Cooking. Mark also has other sites and blogs, including MarkHansenMusic.com and his MoBoy blog.