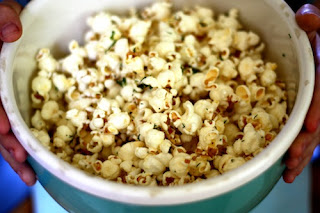 Well, good morning!
Did you wake up today craving Lay's Dill Pickle Potato Chips? Of course not, silly. Me either.
Okay, maybe just a little. We bought a bag by mistake and became addicted. And "by mistake" I mean "on purpose." And by "addicted" I mean "addicted." They are so good it's not even funny--like the best salt and vinegar potato chips you ever ate, but with a little hit of garlic and dill. We bought another bag to make sure they were as good as we all thought they'd been, and they were. And it was frankly a relief when they were gone, since we were then able to get on with our lives instead of pondering how soon would be too soon to have another snack.
Pickles themselves are very satisfying to me. In fact, we had a tornado warning last week, which was just totally surreal for an east-coast city kid like me. Really? The basement? "Who was on the phone?" the kids wanted to know, and I had to say, "The town manager. We're supposed to go into the basement." We brought the cat with us and everything, and in the 30 minutes we were down there, we played 3 games of ping pong and ate an entire jar of bread-and-butter pickles from the canning shelf. "This is great!" Ben kept saying. "There's food and ping pong! I could stay down here forever!"  It was almost a little disappointing when the phone rang again, summoning us back upstairs to normal life.
Anyways. Pickles from a jar are still not Lay's Dill Pickle Potato Chips. But you know how it is around here. Debased food obsessions only inspire me! Can I replicate this terrible, delicious thing--but in a healthy format? And the answer, in this case, is a resounding affirmative. Yes, yes, yes!
So it's popcorn, not potato chips, but you love popcorn, right? For one thing, it's crazy cheap. And it's a whole food. And it's got lots of fiber and zero additives. And there's just something so satisfying about buying a jar of popcorn and slipping it into your purse, since the equivalent amount of processed snacks would have you hauling fourteen million giant, puffy bags out to your car.
Plus, and I know you know this is coming, if you get a Whirley-Pop, you will make popcorn every day, because it is so ridiculously easy and satisfying. Every day. Okay, probably more like 275 days a year. Especially during the summer. When we have lots of kids thronging through the house for Socialist Friend Camp. Could there be an easier or more economical way to keep them happily snacking? Of course not.
You're hesitating still. Because you don't like the idea of buying something that only does one thing (although, technically, you could roast raw coffee beans in it too, like my friend Jonathan does). I worried too, when my brother and sister-in-law gave us ours (which they gave us for the sole purpose, I swear, of satisfying their Whirley-Pop Kettle Korn addiction while visiting). But I'm telling you, unless you live on a houseboat, it is worth the space it takes up.
Plus, it's so easy that you can make your kid do it. Here's a little real-time video of Ben making popcorn in the Whirley-Pop for the first time ever! That's how easy it is! Sorry about my relentless muppet-like cackling in the background. . . and for the fact that 3 minutes is a long time to watch someone pop corn, for anyone who's not a blood relative.


One last thing: I find the flavor too distracting for this particular recipe, but in general we have started popping our corn in coconut oil, which makes it taste exactly like old-fashioned movie-theater popcorn in the best possible way. I really recommend it. Do you have favorite popcorn toppings or methods or recipes? Please share.

Edited to add: I'm glad you asked about coconut oil. Here's an interesting article on how it turns out to be a really healthy oil after all.
Dill Pickle PopcornMakes 8 cupsTotal time: 5 minutes
2 quarts popcorn (in the Whirley-Pop, this is a third of a cup of kernels popped in 1 tablespoon of vegetable oil)2 tablespoons butter, melted2 teaspoons vinegar½ teaspoon garlic powder1 heaping tablespoon finely snipped fresh dill (or 1 teaspoon dried)Kosher salt and black pepper
Stir together the butter, vinegar, and garlic powder, then add it to the popcorn. If it's still in the Whirley-Pop, then you can turn the handle to mix it all up while you add the seasoning. Stir well either way, then stir in the dill and plenty of salt and black pepper. Taste for seasoning and prepare to become wildly obsessed. 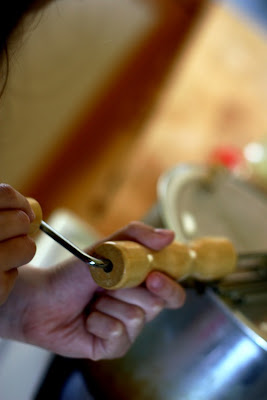 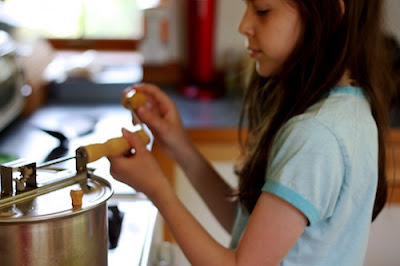 Wait. Now I'm self-conscious. Was it the photo captions that made everyone think I was drunk? I swear I wasn't. Not that I remember, at least. Ha ha. 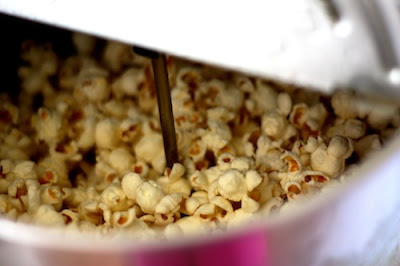 Popcorn is kind of magical. I wish you could pop beans! I would love that. Can you? 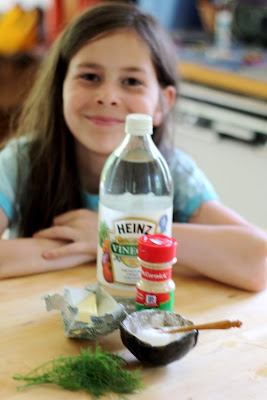 We nailed this pretty much on the first try. If I had vinegar powder, I'd add more vinegar, but you have to be careful about how wet it gets. 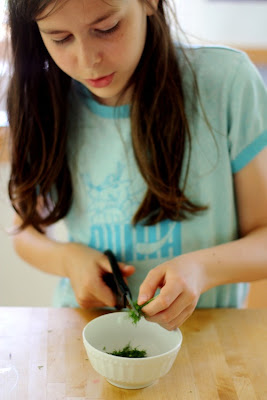 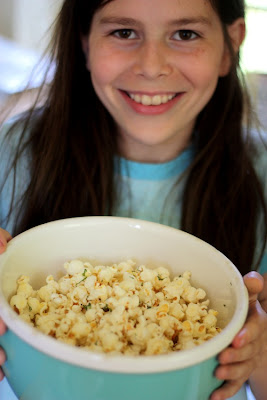 We made this to snack on during a game, but it was gone before we even sat down to play. Which is not so different, I suppose, from finishing the movie-theater tub before the previews are over.