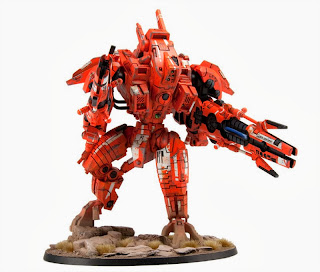 So this guy has recently been released and if you have not read the experimental rules for this mother you should.   Kirby over on 3++ is the new black has a good review of him if that is what you are looking for.  What this has brought back into the forefront of my mind is how OP forgeworld can be and IMO why FW units should not be used in normal games.  Note I exclude FW models that exist in a codex but there is no plastic kit for.  That is different and not at all what I want to talk about.  What I do want to talk about is how the 40k approved units drastically change the nature of the game and also bring an unfair advantage to those with a large wallet.

Now while it is true that this game is expensive in general, FW adds another layer to it and they are not limited to a codex and balancing it out.  They make cool models with cool rules first, and that is fine.  If you want to play in friendly games go right ahead, there is nothing wrong with that.  IMO though the codex is there for a reason, those are the units you can play and thats it.  Apocalypse is there for a reason.  That fuck face above is just horrible, cause apparently what the Tau needed was another unit that killed everything, and then murdered their children and kicked their dog for good measure.  Seriously go read the rules(experimental) for it.  The fact that it will most likely get 40k approved eventually is just horrendous and will be seeing this running tabletops sucks.
This is true of most FW units for most armies and at this point in the evolution of the game, most armies have plenty of choices within their codex's that there is no need of FW to provide a solution to their problems.  And that is the crux of it, the Codex is there to provide the units you can use, it gives you options but is also there to limit you.  It also provides consistency, everyone know what to expect.  But then you pull out some random FW model from a book only a few have and this is somehow ok.
Sorry if I am coming off as pretentious, but I am a purist I guess, if its not in your codex then you can't use it unless agreed upon.  I don't think TO's should allow it but as long as its understood going in then thats fine.  Just because I don't like it doesn't mean some TO has to bend to my whims either.  I just think it gives an unfair advantage to someone that can spend more than other painters.  I know my feelings may not be popular to other guard players.  With Elysians and DKoK being very popular, but I'm sorry the rules exist in the codex for a reason.
Again I want to emphasize that in friendly games that both parties agree to play with those rules there is nothing wrong, but then there is that guy.  The one that trolls the FLGS with his FW army waiting to pounce on the unsuspecting player.  Oh I'm using three contemptor dreadnaughts btw, their 40k approved.  And that is the kind of thing I have a problem with.  It also irks me in competitive play, as I see the codex as the standard and what gives players limits.  Limits is probably the most important thing a codex does, it limits you from taking whatever you want, you have to choose between units and how they will affect your army.  By allowing FW, you remove those limits to a degree.  Yes you still have force org and points, but have access to 40k approved changes the game substantially, as many of the units available are very powerful when compared to their codex counterparts.
Now when it comes to FW armies, like Death Korps of Krieg, I'll admit that I am on the fence a little.  I still don't like that they tend to have access to better weapons and gear than most standard codex armies.  But they are at least limited to their own army list and don't pull from both.  To take the DKoK example further, they aren't running Creed as their HQ and then DKoK specific units as well.  This is where I am more ok with.  Its a full army list and it is missing things from the regular guard codex.  Where I have problems is where someone just takes FW and slaps it into their regular army and calls it ok.
Now I like fluff a lot and this is another reason that I am ok with FW army lists that aim to do this.  Eldar Corsairs, DKoK and Elysians are great in the sense that they allow you to play an army that is hard to play with the rules as is.  Now when it comes to Guard, the current codex lets you do pretty good at playing fluffy armies without resulting to FW.  Not perfect by any means but you can certainly play an armored company or an artillery or drop troop.  Granted you are missing some special rules to make it truly fluffy but its at least there now.  And hopefully with the next codex and ensuing supplements these armies will be fleshed out even more.
I have nothing against the models themselves, they are in many cases beautiful and awesome, its the rules and the haphazard nature in which they can be added to armies that I take issue with.  Army lists are there to limit you as well as provide options.  When FW is used to circumvent this I don't like it.  When it is built into an army specific list that has its own limits, that is ok.  When it is used to create fluffy and cool armies and showcase awesome models I love it.  When it is used to WAAC, well then go screw off in a corner because I will not be joining you.  Come talk to me when you want to play apocalypse, otherwise I don't think someone should have to break their wallet and bring FW in order to be competitive.
Let me know if I am just being an ass about this, but that is how I feel.  I am interested to see what you all think.
GG