Frank Gehry unveils the design of the "Treehouse", the business school building for the University of Technology, Sydney. This building is named Dr Chau Chak Wing Building, after the Australian-Chinese business leader and philanthropist who has donated $25 million for the project. This building will be his first ever Australian building. 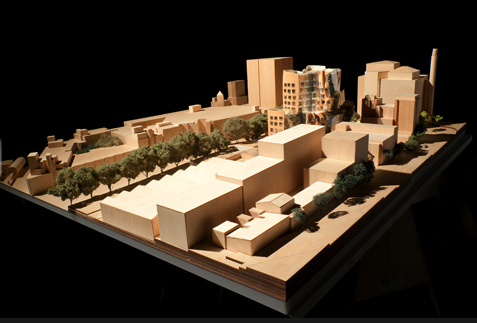 Oblique view of University of Technology, Sydney (ITS) Business School Building — Model scale 1 to 200, Frank Gehry Partners, Sydney, Australia, © Frank Gehry Partners. Originally appeared on University of Technology of Sydney's website
The Building's shape
Newspapers discuss Gehry's design with passion.
Frank Gehry wants this building being a landmark for Sydneysiders.
Apparently, according to newspapers, particularly this one I quote, Heath Gilmore's paper "Gehry competes with ghosts for architectural vision", a paper published the December 17th 2010 in the newspaper The Sydney Morning Herald, "The $150 million landmark building (…) will be an evocative blur most Sydneysiders".
If, Heath Gilmore continues, the open harbour approach was already taken by Danish Joern Utzon () for his Sydney Open house, perched atop its Bennelong Point pedestral, Gehry's design, on the contrary, is working within twisted alleys and streets laid out in convict-era Sydney. 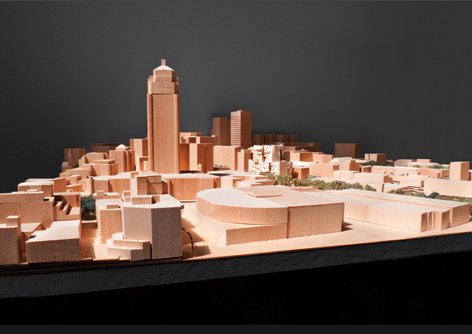 Site model of the UTS Business School Building — Model scale 1 to 500, Frank Gehry Partners, Sydney, Australia, © Frank Gehry Partners. Originally appeared on UTS' website
Joern Utzon's Opera House, which was completed in 1973, is a building made of tile-clad concrete and precast concrete. The particularity of this prodigious building is its shape, with stairway, and expressionist spherical section roofs; each spherical section is 75.2 metre (246 ft 81/2 in) radius. 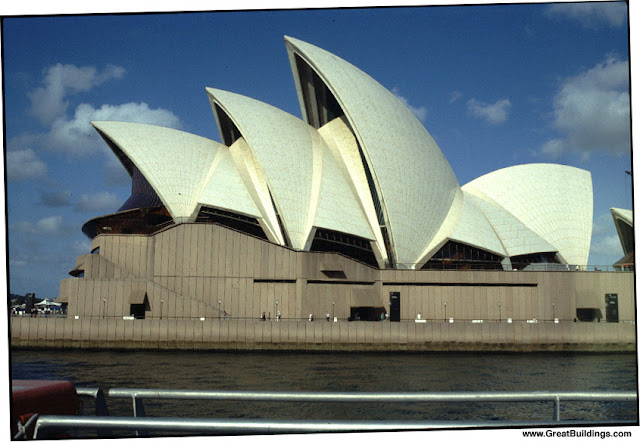 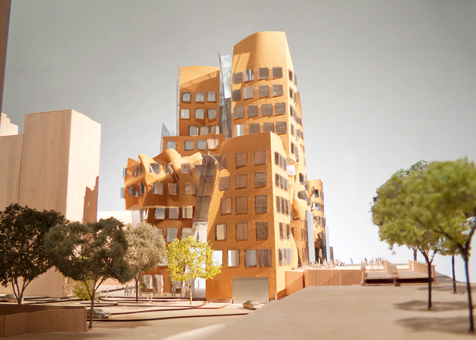 UTS Business School Building — View north Ultimo Pedestrian Network, Model scale 1 to 100, Frank Gehry Partners, Sydney, Australia, © Frank Gehry Partners. Originally appeared on UTS' website
Gehry's building is embedded in the streetscape. The power of the building would "pulsate through the crowded inner city, offering people passing by "fascinating vignettes", Gilmore writes.
Frank Gehry wants his building be considered as "Ghosts". What does he mean with "Ghosts"? If you look of the few images of the design of this building, you'll find first response. Frank Gehry wants his building be "ghosts" like Michelangelo and Leonardo da Vinci.

The Dr Chau Chak Wing building will be based on a design from the inside-out. This strategy consists of the design of internal spaces which will be developed before design of the building's exterior. Hence the name "Treehouse".
The building will have two distinct external façades. The west facing facade will contain the ground level entry off Ultimo Road. It is composed of large shards of glass façade. This glass will be slightly reflective to fracture and mirror the image of the surrounding buildings of the neighborhood. Leonardo da Vinci and Michelangelo's sculptures inspired the folds of undulating brickwork that form the west façade. 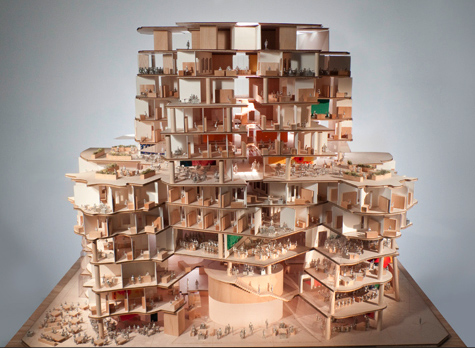 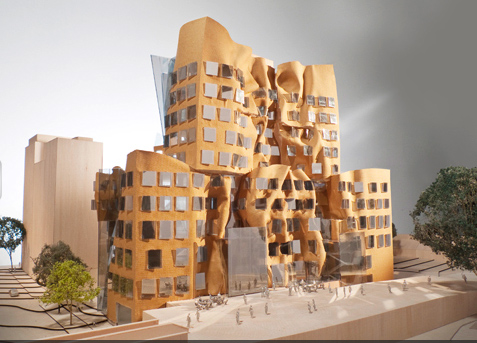 UTS Business School Building — West façade, view across Ultimo Pedestrian Network, Model scale: 1 to 100, Frank Gehry Partners, Sydney, Australia, © Frank Gehry Partners. Originally appeared on UTS' website
The other façade, the east facing one, is a collection of angled sheets of glass that will mirror the image of surrounding buildings. It presents a fractured view of the urban sandstone and brick heritage built by people long gone. This façade contains an entry from the UPN which is made of the colored brick similar in color to the Sydney Sandstone. 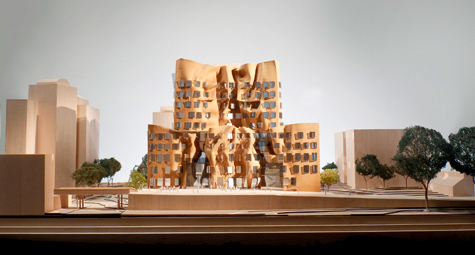 UTS Business School Building — East elevation, Model scale: 1 to 100, Frank Gehry Partners, Sydney, Australia, © Frank Gehry Partners. Originally appeared on UTS' website
The form of the east façade curves and folds like soft fabric, Gehry adds. The brick will be set in horizontal courses and will step or corbel to create the shape. The texture of the surface will be rough and will emphasize the mass of the material. The shape will flatten as it will wrap around the north and south corners. Large windows will punch this façade.
The building will be constructed on the corner of Omnibus Lane and Ultimo Road, Ultimo, on a small block of land most recently used as a car park.

Peter Bailey, Arup Principal and Project Director says on this project: "Frank Gehry's designs are most easily identified by their unique geometry and exploration of different materials, and the Dr Chau Chak Wing building carries Gehry's indelible mark on its façade." Arup's intervention can be summarized as follows: "One of our most important tasks on this project is to capture this innovative form in a usable and sustainable fashion."

Internal structure
The internal structure will look like a "tree house" that generates a sense of "creative play", says Gehry. What does he mean with "tree house"? The building, Frank Gehry says, will be composed of vertical stacks of office floors with spatial "cracks" in between.
Each of the larger lower floors will be divided into six floor segments. The building façade, mentioned above, will fold in between these elements bringing natural daylight deep into the center of the floors.
The ground floor of the building will house a café with seated dining opening to additional outdoor tables on the sidewalk and proposed plaza to the north. A coffee bar with outdoor seating will animate the upper level entry off the UPN, conveniently adjacent to the student center and the large student lounge. It will be connected via a staircase to the student lounge. 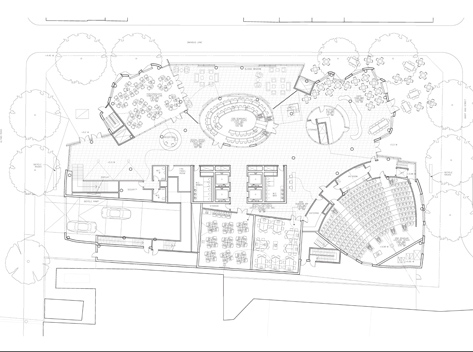 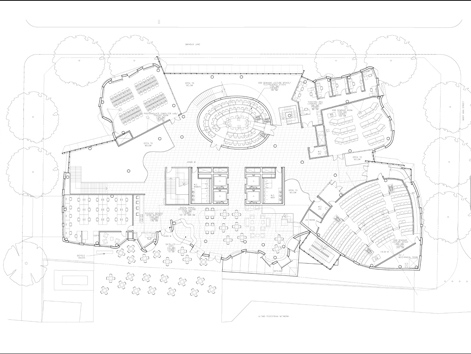 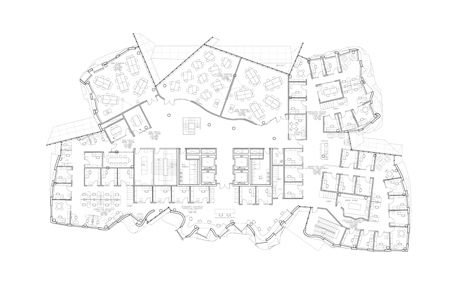 Sustainability
This building will be designed to minimise greenhouse gas emissions. Gehry has recently confessed to 2011 January issue of Playboy Magazine that architects should "do more" in terms of sustainability. For this building key sustainability measures currently being investigated will include:

low carbon emissions, achieved through low-energy air conditioning and tri-generation power supplysmart air conditioning, designed to switch off when offices are empty for an extended period of timemonitoring of CO2 levels within the buildingintelligent lighting that adjusts according to natural light levelsoptimising natural light, including window positions, floor plate design and window glazingrainwater capture and storage for use in cooling towers and toilet flush applications.

The Dr Chau Chak Wing Business School Building is expected to be finished for the 2014 academic year and is a key part of the University's City Campus Master Plan.