I Am American Food! …and Other Blog Updates 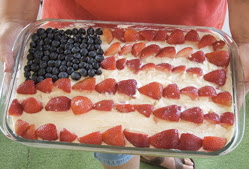 I did it! I'm just not sure what "it" is yet. I graduated from About's guide program and will now be the guide for the new "American Food" site. I still have to complete a certain amount of content before it goes live in a week or so. Once it does go live, I will have a better idea of how the balance between the two sites will work. As those of you that visit About.com's sites, all the guides have regularly updated blogs. So, eventually you will be able to get your daily-recommended amount of Chef John from two sources.

The bad news first; for the next week or so, I will pretty much will be working exclusively on finishing the American Foods site. I will also be filming some video clips for About, but for the near future no "Food Wishes only" clips. I will, of course, post the About clips I've already done for them as soon as they go live (like the Tuna al Tonno). I will be posting an Escargot video that just aired. Mmm…. snails, I mean, mmm… garlic butter!

The goods news is hopefully the income from the About site, along with the clips I produce for them, will be enough to keep this old chef out of a real job in a professional kitchen (60 hour work week = no blogging), and will allow me to continue to grow and expand this site, and it's foodie resources. Once the About site is build, it's just a matter of maintaining it, and I will be able to get back to a normal schedule, except now I will be able to pay my bills with money, instead of ravioli!

Yes, I still plan on putting all the large corporate culinary school out of business. Unless, of course they make me a huge offer to buy my site. I am working with someone right now in determining whether the course should be done as online classes, or as a collection of DVDs. As far as a time frame, I don't expect to have anything available until April 08. This also is related to the newly found income sources, as I will be able to afford to take off some time and just work on the culinary course, as I have done in acquiring the About gig(s).

For the second consecutive month I have won the coveted iFoods.tv "Member of the Month" competition! I didn't announce anything the first time I won (I wanted to make sure it wasn't a fluke), but now that I've won two months in a row, I'm going to start rubbing the other competitors faces in it! If you want to check out the site,click this link. It's run by Niall Harbison, one of Ireland's best chefs, and they award points for uploading video clips and photos, etc. Quite frankly, I have crushed the field thus far.

I would like to thank Google, and their army of robots (that will eventually take over the world, and enslave us all) for raising my page rank to a 5 out of 10!! No, I don't really know what that means either, but hey, 5 is higher than 4, right? If any web-marketer techno geeks care to explain the ranking to us normal folk, please do.