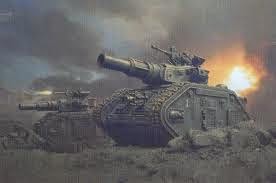 Finally some rumors on IG stuff coming up, and if it holds to be true, It looks to be really good.  Tread heads will be very pleased.  While I like the AM/IG book from a tactical perspective, it is somewhat bland and mising of some flavor.  I am hoping that a lot more supplements and formations are in the works to add some of the missing flavor that has been tanken out.

What is supposedly in the pipeline is the steel host formation.  It consists of a tank commander(assuming squadron, not on his own), 3 leman russ squadrons, 1 hydra(squadron?).  The formation has elite tank crews, giving preferred enemy to all vehicles(in formation) within 12" of commander.  This is a solid little formation, that can be relatively compact and not take up huge space, or can be quite large and fill out to a full armored company if you want to.  the hydra is a nice inclusion, though it doesn't gain as much from preferred enemy as the leman russes do.

I actually really like this and this just screams plasma death tanks(executioners).  For me I would prob keep this small.  Tank commander with a tank I like, then the other three would be exectutioners, and the hydra is a hydra.  If the tank commander can somehow be taken on his own, which I seriously doubt.  What I am most inclined to do is take two vanquishers and three executioners.  This gives you a psuedo squadron that you have serious flexibility and has nice bonuses.

There are lots of ways to play with this, and hopefully this turns out to be true and not some trolling ass hole.