It's Only The Real Thing Once A Year 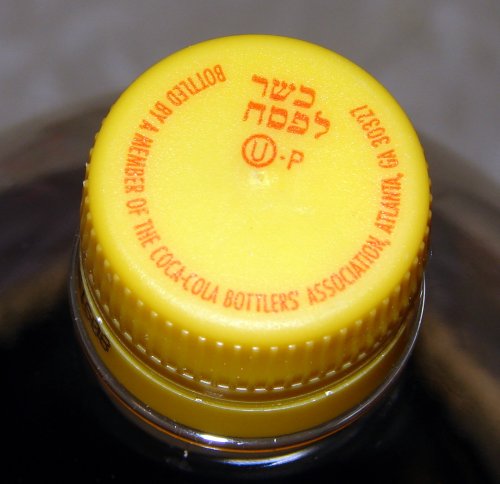 In the early 1980's, Coca-Cola began sweetening Coke with a mixture of corn syrup and sugar. Thanks to high government tariffs on sugar and subsidies for corn, corn syrup (and especially High Fructose Corn Syrup, the bastard child of industry and agriculture) has ever since remained cheaper than sugar, and in 1985, after the New Coke flop, Coca-Cola Classic was permanently reformulated to use High Fructose Corn Syrup (HFCS) as the sweetener.

Casual Coke drinkers - and those who have never tasted anything else - don't seem to mind, but there are hundreds of thousands of people in the US who do mind. HFCS does taste differently than refined sugar, and the Coke we're drinking now is not the same Coke many of us grew up with.

However, you can still get The Real Thing - sugar-sweetened Coke - if you are fortunate enough to live in an area with a large Jewish population. Corn-sweetened beverages don't meet the strict Kosher requirements for Passover, and bottlers in that area, unwilling to alienate a large market segment, produce Kosher-for-Passover Coca-Cola for a few weeks every year. It uses the true original formula - the one using sugar instead of HFCS, and you can identify it by the cap bottlers use to distinguish it: bright yellow with Kosher L’Pesach printed in Hebrew on the top.

How to find it:

It's only available in the weeks leading up to Passover (you can look up the Gregorian-calendar dates for Passover here. ) Find a Kosher market or deli, or a supermarket which serves a local Jewish population and which is big enough to dedicate a few aisles to Kosher merchandise during the season. So far, I've only found the 2-liter size, but there are a couple of bottlers putting out 12-ounce cans also.