On Saturday my youngest son turned 22 and I've just realised we didn't even take a photo, probably the first year that has happened. In fact, he wasn't even really the centre of attention because his 4 year old and 2 year old nephews were spending the night at Grandma and Poppy's. He did get to choose the dinner, a family tradition, and we made his lasagne from scratch, as he requested. I still can't get it to taste the same as his Nonna's lasagne tasted though, but it was pretty good! 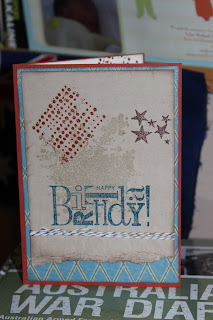 He had chosen two books he wanted, and I topped up the gift with a little cash, and a card made with love. Aaron approved and said that it was very suitable.
I used one of my favourite stamps, Extreme Elements (page 60) and Well Worn DSP set the colour scheme of Cajun Craze, Early Espresso and Pacific Point on kraft. I wound some Baker's Twine in Early Espresso around. The greeting on the front and inside were from the Hostess set, Happiest Birthday Wishes, which retires at the end of this catalogue (31st August 2012). The numbers are a 'sneak peak' from a set to be introduced in September -SHHHH!

Hope this blog gives you some inspiration,
Happy stamping, Rachel