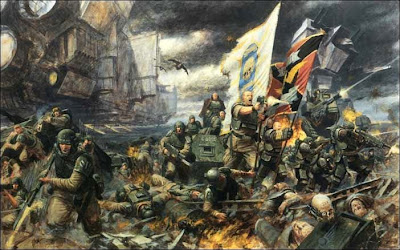 To continue from my last post, I covered some of the general rules and wargear and went through the first two sections of the army.  Now it is on to the mainstay of the Imperial Guard army, troops/fast attack/heavy support.  This is where the Guard army currently shines, but there are some definite changes that could be had in these areas.


Troops
To begin with the standard Platoon is awesome, putting over 100 guardsmen down for one troop choice and seeing the look on your opponents face really is priceless.  But this doesn't mean the platoon is perfect.  To start it right off I think conscripts need to go back to being their own choice, as a part of the platoon they don't really fit organizationally and fluff wise.  Separating them would actually be a benefit as well to forcing you to choose how you want your army to go, do you really want to spam a crap ton of cheap guardsmen or do you want a more flexible platoon that can't take as many models, but more weapons.  Going hand in hand with this, conscripts need access to at least some special weapons, namely flamer and grenade launcher, and be able to take a commissar other than the lord type.  Why regular squads can but conscripts can't is beyond me.  This would be good to add more flavor and see some more troops on the field other than a platoon blob or vets running around.  For the Troops section in general I see it breaking down like this: Veterans, Platoons, and Conscripts, Penal Legion can be kept or gotten rid of.  Either way Penal Legion aren't great or bad, I like them because they are nice and fluffy.  I do like having my "failure squad"  where I put the failures of previous battles into my armies Penal Squad to give them a chance at dying in glory or redeeming themselves and earning a place back in their line squads.  Marbo has made his way to this squad after he has biffed it a couple of times.  Its more fun for me than anything really tactical, but that is a good enough reason as any to keep them.

For Platoons there really isn't anything that I see that needs changing.  Tweak the points a little bit and allow sergeants access to the melee and ranged weapons list.  A shotgun would be so much more useful than a las pistol but that is more minor than anything.  Based on how sergeants are working for other armies, I see this as a likely possibility.  As long as the ranged weapons list is comprehensive and includes shotguns, sniper rifles, and the rest of the main weapons.  Oh and something I forgot to mention in the last post discussing wargear in general was Vox casters, they should ignore the distance radius for giving orders.  They are radios, you would think that would mean they would actually be used like fraking radios.  Now for special weapons squads I'm on the fence.  I would like them to have maybe a special/doctrine rule, give them specialty so you can play them different based on weapons load out.  Something along the lines of sharpshooters if you take sniper rifles, demolitions for meltas/demo charge, and maybe something for flamers and grenade launchers.  This isn't too big of a wish on my part, and I certainly won't be bummed if it doesn't happen.  Really I just want another option for snipers other than ratlings, giving a sniper rifle to a BS3 guardsman isn't really that effective and you can't spam enough of them to be really make up for it.

When it comes to veterans, the doctrines need a serious points reduction, 30 pts is way to much for what they offer, or they need to include some special rules for them to make the points cost justifiable.  Rumors on Faeit 212 point to an new squad composition, starting at 5 models and being able to add to a total of 10.  This I really like, coupled with the rumor of the salamander as a transport, this could really be good change to the guard.  Salamander vets may be the new thing if the rumor holds true.  The vets are supposed to lose one special weapon but the sarge can issue orders, and I will take that any day, even if its a limited order list.  I really do like this rumor and hope that it comes true.  Veterans are great and adding a little more tactical depth to them would make them more flexible on the field, and also a lot more fluffy.   Other than that points reduction is the main thing, and a plastic kit to actually have a non forge word option to take the weapons that are in their options.

Dedicated transports.  As is there is only one and it is the Chimera, the best transport ever, shut up wave serpents are dumb!  The chimera is good, its point cost is about right but I expect to see a reduction seen in other codex's with you having to pay more for optional upgrades.  What I really want to see is autocannons being an option for the turret weapon.  That really is what I want for these guys.  Other than that, its not broke and don't need fixing.  I really do like however the rumor of the Salamander, having a second transport finally would be amazing.  Can carry six guys and has a cool rule to go with it, hopefully make it an upgrade option for either fast or command variant, basically one is geared towards transporting troops, the other for buffing command squads.  If these happen as well as a plastic kit to go with it I would be very happy and might finally do a mech company.  The plastic kit could be salamander/griffon, another vehicle I really want.

Fast Attack
Fast is another section that is good and really doesn't need anything added, just some points changes.  First lets talk about the obvious, the valkyrie/vendetta.  It really doesn't need two sections for it, this can easily be put into one option with upgrades for kitting it out as you see fit, this would have a combined effect of making different options of the vehicle playable and could also give a reasonable price increase to the triple TL lascannon option.  Also get rid of ordnance on hellstrike missiles or a rule that allows them to get around the ordnance snap fire issue.  I would love to outflank with these guys again but it isn't a necessity, just me wishing for the impossible.

Hellhounds, they aren't broke and don't need fixing.  Just bring in line in points with the rest of the army and that really is it.  Don't know if anyone wants anything done to them but they have good options and are both fun and work well.  I just wish my devil dog would work as well as it should in theory, but that is more a problem with my dice rolls than anything else.

Sentinels are over costed for what they bring.  I hope the rumors aren't true that they are being brought into one section and losing the armored option.  I like those guys even if they are too much points for what they bring.  Now as sentinel commander upgrade could be nice, give special abilities to the squadron or special wargear upgrades like auspex or targeters.  One more thing, I want that damn chainblade that is in the kit to have a use, its there I want it to be more than cosmetic.  Its there, its huge, it should have some use.  For me I see it as counts as an evicerator or chainfist maybe.  That might seem overpowered but they don't have many attacks, and their initiative is meh so dedicated combat and anti-armor would still have no trouble with them.  Other than that, they need a points reduction either in their base or in their upgrades, as is they are very expensive for what they bring and add up quickly if you take anything other then their standard wargear.

Rough riders, they're stupid and fuck 'em.  Ok well I may not like these guys because riding horsies in the future is dumb, I guess they forgot they could ride harley's instead but whatever.  Really when it comes to these guys I don't know, prob need to be able to take a larger squad.  A redo of the hunting lance, option for having more than one use.  Bring points in line to make them usable as the suicide squad that they are.  I really don't play these guys and have pretty much ignored them since I began playing guard ten years ago.  So this is where I am open to ideas on what they could use.

Heavy Support
The other mainstay of the guard, all that delicious heavy firepower that they can bring.  As far as new options, I would love a non mech artillery option.  Ground based basilisks, heavy mortars and such. Give some more options and would let me really play the infantry army with having to bring mech to bring artillery.

Leman Russes, they are great.  They are about right when it comes to points, though there sponsons are expensive in my opinion.  I would love to see a return of a special rule along the lines of lumbering behemoth, but I don't see that happening.  Pask also needs a slight point drop, he is just a little expensive.  Would also love a squadron leader upgrade as well, this could be a counter point to pask.  Drop him from the codex and give the squadrons the option for a tank commander upgrade. Also maybe an option for specialty rounds for the MBT and Vanquisher.

Manticore/deathsrike.  Again these guys good.  The deathsrike is nice and fluffy, what could be nice is an option for different warheads, think poison gas or something like that.  Manitcores are great and again don't really need changing, maybe different rounds.

Hydra.  This is another one that is pretty good at what it does.  Its cheap, you can shoot just about any flyer or skimmer down.  Maybe a missile upgrade to give it a flakk missile battery instead of auto cannons, but that really isn't a must, just would be cool.  Some want interceptor, that would be nice, but that could get op very quickly.  Would have to be an expensive wargear upgrade with some disadvantage to it to keep it balanced.

Special Characters
Last but not least are the SC of the guard.  Really I don't have anything to say on any specific one but what I would hope to see is them brought in line similar to the Space Marine codex.  Basically the SC should be limited to their home world regiments.  With maybe a few universal SC, Yarrick could be one, or not, this isn't a major wish.  I do like the idea of regiment specific characters, keep the guard from pulling the same shenanigans that Space Marine players pulled in the previous codex.

For the characters themselves, a couple could go or need a serious points reduction, the vet sarge upgrades are just way to expensive a 60pts for what they bring.  Others just need to brought in line rules wise with 6th ed.  Other than that that is really it.

Sorry for the long post but that is in a nutshell of what I would love to see in the new codex.  A model update would be huge, bringing stuff over to plastic or finecast and actually having models for stuff that is in the rules.  Let me know what you think of this.