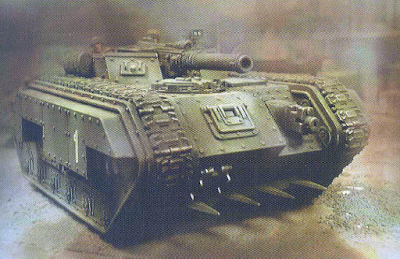 GWs rules writing, as we all know, is not always stellar.  For most things though, even when things see saw, they do get things pretty close.  However there is one type of unit that GW struggles to represent on the table top, and that is recon units.  Recon units have specific roles and are significant force multipliers for their armies.  On the table top, they tend to be lackluster.
There are many recon units in the game, and at best, most just have scout, woo!  The problem is two fold.  In real life, recon units advance forward to find enemy formations and then relay that to the army.  In 40k, we already see all the units on the table, so game mechanically, you need to do something else to represent recon units "revealing" the enemies position.  Recon units also can be heavily armed, and will hide in ambush positions to hit the lead elements and then fall back.

Recon is a pretty wide band in terms of units and how they fit in exactly to the role.  You can have CAV Scouts, a small unit of infantry in a heavily armed transports that advance forward to engage lead units and relay targeting data while falling back.  Then you have Scout units of light infantry, which can easily engage infantry but are limited against vehicles, whose main role is to find a good spot to call artillery and plink off the survivors.  This is a good thing, as 40k has many unique armies that don't wage war "normally" so you have a band that you can put recon units into that will fit the character of different armies.

Now there is one unit that GW did get right.  That unit is Tau Pathfinders.  They are a light infantry unit, that can be seen with a transport devilfish, though not as often as you used too.  Shooting wise they are nothing special, but thats where markerlights come in.  As a unit, they do little damage with their weapons, but it is their targeting capabilities that make them deadly.  This is how you can represent a recon unit properly.

Outside of Tau though, there really aren't any recon units that do anything other than scout or infiltrate.  They aren't force multipliers.  For IG, scout sentinels are a great example of this.  What do they do to represent that they are recon units in the lore?  They have scout.  And thats it.  They do nothing else.  Salamaders are another example, which are FW and haven't had updated rules in ages.  And they have nothing to them.  They are fast and thats about it, the command variant can help with reserves, but the rules are so old that they don't really interact properly with current 40K.

How would you go about fixing this?  Giving all these units markelights is not exactly an option, but there are other ways to do this.  Wargear can be given that does certain things, like auspex, or special rules for those units to represent this.  A lot of these things do already exist in some form.  The Target Sighted special rule is an example.  The model that does this gives up its shooting, but this represents it transmitting the targets coordinates, giving the army a shooting buff (twin-linked) against that unit.  A modified Auspex that reduces the target units cover save is another option.  Cover is the elephant in the room, with jink and powers that buff cover saves, some of the best armies are ones with cover manipulation.  While ignores cover is out there, its not evenly accessed across armies.  IG have ignores cover, but thats limited to infantry.

Fixing recon units would not be a major task, just modifying the rules of each unit that stays true to each army, and buffs it in a way that is representative to the armies needs.  IG have decent access to ignores cover, but buffing their shooting, especially for vehicles, is something they lack outside of prescience, which is limited due to the psykers needing to be relatively close to the unit they are buffing.  And I don't think psykers should be a necessary requirement for an army to be effective.

I hope in the future, these units get re-looked at to give them the rules or wargear to represent their role on the battlefield properly.