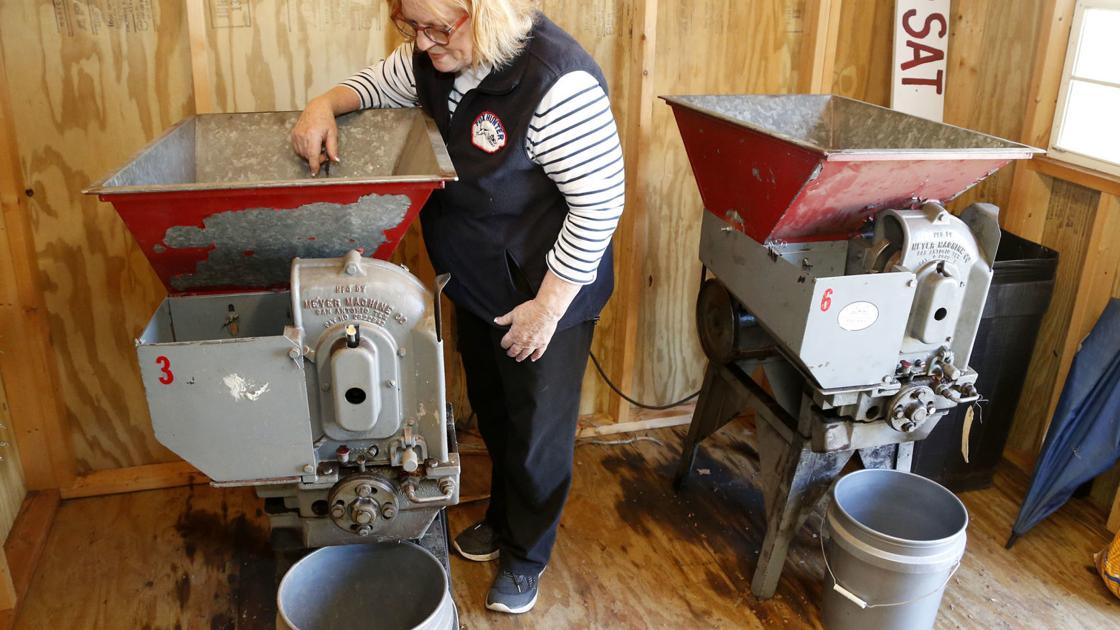 Pecan harvest in full swing, get your sweet, salty and spicy recipes

It may be the time of year when local farmers markets that sell local produce and crops slow down, but here in Oklahoma, pecan season is in full swing.

Pecan trees are native to the United States and, while they grow best in the southeastern part of the country, the crop has become a multimillion-dollar industry across all regions. Who doesn’t love pecan pie, butter pecan ice cream, pecan pralines? Need I say more?

Thankfully, the pecan harvest in Oklahoma kicks in during the weeks leading up to Thanksgiving, undoubtedly one of the most popular pecan-cooking days of the year.

According to Bob Knight, owner of Knight Creek Farms and a former president of the Oklahoma Pecan Growers Association, Oklahoma’s harvest averages 20 million pounds of pecans each year.

“That number will grow this year unless it keeps raining,” said Knight.

There are over 500 varieties of pecans, but several that fare particularly well in our Oklahoma weather. All modern pecan cultivars are grown at a USDA research station in Sommerville, Texas, and many varieties are named after Indian tribes.

“Pawnee and Kanza are favorites and grow well here,” said Knight. “Our only limit here is the growing season. And the rain.”

The heavy rain tends to wash out the groves, a regular problem since many orchards, groves and patches are situated near rivers or creeks. In 1986, during one of the most significant floods to hit the state of Oklahoma, Knight was looking for farmland to grow pecan trees. He bought the only farm he looked at that wasn’t flooded. Knight Creek Farms now consists of 15 farms, groves and patches in Creek County.

“We harvest native pecans from up and down Polecat Creek,” Knight said. “We harvest more off the farm than on it.”

But the Pawnee and Kanza varieties that are grown on the farm are the award winners that customers covet.

“We are looking to harvest around 200,000 pounds of pecans this year,” Knight added. “The native trees are loaded this year so that that number could go up.”

Native pecans grow wild in Oklahoma, and over 140,000 acres are harvested throughout the state.

“The pecans are smaller, but some of our customers think they are the greatest in the world,” said Knight.

In addition to growing and harvesting pecans, the Knight Creek Farms’ Pawnee pecans have won Best in Show at the Oklahoma Pecan Growers Association State Pecan Show and Knight Creek Farms is working closely with researchers at Oklahoma State University to ensure the best practices are utilized in pecan horticulture and environmental management.

Knight Creek Farms brings freshly harvested pecans from the orchard every day to its shop at 8408 S. Elwood Ave., and the pecans are also available at The Farmstand in Mother Road Market and the Cherry Street Farmers’ Market during market season.

Bob Knight shared the family’s grand champion pie recipe, just in time for Thanksgiving. We’ve also included a couple of holiday-worthy appetizers, some sweet, salty, and spicy nuts and a bar cookie with a shortbread crust and a gooey pecan filling. Grab some pecans and go nuts.

2. Gently line pie pan with rolled out pie dough. Be sure to press into edges and up the sides. Use fingers or a fork to create a decorative edge of your choice. Set aside.

3. In a large bowl, whisk together butter, corn syrup, brown sugar, white vinegar and vanilla extract. Add eggs and salt and whisk until mixture is smooth. Fold in pecan halves.

4. Pour mixture into pie crust and spread evenly with a spatula. Take pieces of aluminum foil and gently cover edges of pie crust. Place pie on preheated baking sheet and bake until pie is set in the center, 60 to 70 minutes.

5. Remove pie and allow to cool completely before serving or chilling. Pie can be made the day ahead and refrigerated overnight. Allow pie to come to room temperature before serving.

There are many arguments as to the origin of this dip, but the popular party snack has been served at all many a family gathering for decades. Holidays are not complete without it.

1. In a bowl, combine cream cheese, cheddar cheese, pecans and green onions. On a serving plate, form mixture into a ball or round. Refrigerate, covered, at least 2 hours.

2. When ready to serve, warm jelly in a microwave, until slightly softened. Spread over cheese mixture and serve, with crackers.

With no fear of burning, the gentle heat of a slow cooker slowly draws out the nuts’ natural oils, gently toasting them while perfuming the kitchen. They crisp up nicely upon cooling. This is a mostly hands-off method, only requiring a stir every 30 minutes.

1. Coat the bowl of a slow cooker with cooking spray. In a large bowl, whisk egg whites until foamy; stir in nuts.

2. In a small bowl, combine sugars, zest, rosemary, spices and salt. Add to nut mixture with butter and toss to coat.

3. Transfer to slow cooker. Cook, covered, on low for 2 hours, stirring every 30 minutes.

4. Spread onto parchment-lined baking sheets, sprinkle with salt, and cool completely. Store in an airtight container up to 1 week.

Nutritional yeast adds a savory, almost meaty, flavor to recipes – it is available at health-food stores and many supermarkets.

1. Place the pecans in a bowl and cover with cold water. Let stand for 1 hour.

2. Meanwhile, in a small heatproof bowl, cover the porcini with the boiling water and let stand until softened, about 15 minutes. Rub the porcini to remove grit; transfer them to a small bowl. Reserve the soaking liquid.

4. In a small saucepan, combine the soaked porcini and sun-dried tomatoes. Slowly pour in the porcini soaking liquid, stopping before you reach the grit at the bottom. Bring the liquid to a boil, cover and simmer over low heat until the tomatoes are tender, about 4 minutes.

5. Drain the pecans and transfer them to a food processor. With a slotted spoon, transfer the marinated mushrooms, porcini and tomatoes to the processor; puree to a coarse paste, adding about ¼ cup of the porcini cooking liquid. Add a little more of the porcini liquid if the mixture is too thick. Season lightly with salt.

6. Transfer the pâté to a crock and serve with toasted baguette rounds.

Make Ahead: The pâté can be refrigerated for up to 2 days. Serve lightly chilled or at room temperature.

Looking to switch up your Thanksgiving dessert spread? These bar treats, sort of like a slab of pecan pie, consist of a shortbread crust topped with a gooey pecan and chocolate filling.

2. Place flour, confectioners’ sugar, cornstarch and salt in a food processor; pulse until blended. Add butter; pulse until butter is the size of peas, and the mixture is still crumbly but holds together when squeezed. Press mixture into bottom of pans. Bake until lightly browned, 10 to 12 minutes. Cool on a wire rack.

3. For filling, melt butter in a large saucepan. Stir in brown sugar, corn syrup and salt; bring to a boil. Reduce heat to medium; cook and stir until sugar is completely dissolved, about 3 minutes. Remove from heat. Add chocolate chips, cream and vanilla, and stir until smooth. Stir in pecans. Spread mixture over crusts.

4. Bake until filling is bubbly, 12 to 15 minutes. Cool completely in pans on wire racks. Using foil overhand, lift the shortbread out of pans. Gently peel off foil; cut into bars. Store in an airtight container.

Note: To toast nuts, bake in a shallow pan in a 350° oven for 5-10 minutes or cook in a skillet over low heat until lightly browned, stirring occasionally.

The Pawnee is medium to large in size and is high kernel quality. It's our most popular pecan for snacking.

A papershell variety, the Kanza is small to medium in size and has a rich buttery flavor. It's quickly becoming one of the most popular varieties in Oklahoma.

Pecan oil has a light and buttery taste imparting a touch of nutty flavor without overpowering any recipe. With a higher smoke point (470 degrees) compared to canola (400 degreess) and olive oil (320 degrees), the pecan oil and its flavor are able to stay intact longer and at higher cooking temperatures. Pecan oil also is lower in saturated fat than olive oil (9.5% vs 13.5%). A very versatile ingredient for any chef or home cook.