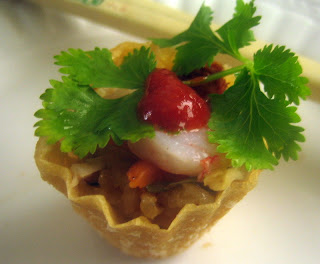 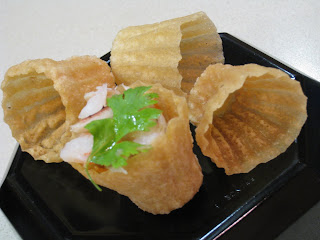 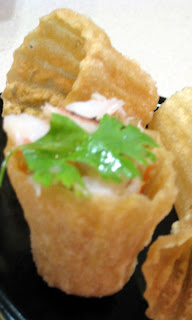 I am very perplexed as to why this delicate and delicious appetizer is so called - Pie Tee . I know it does resemble a tiny pie, it has a crust and filling but to relate to Tee ????? - the only Tee i know is in the Golf course. What i do know is that this is a NYONYA speciality and it could be a more sophisticated way to serve the big brother, Popiah. The Thai Krathong Thong - Golden Flowers is very similar and the Krathong Mould has more shapes, 4 patterns attached to a handle, therefore it is so much more faster to make the cups than the malaysian pie tee mould which is single. 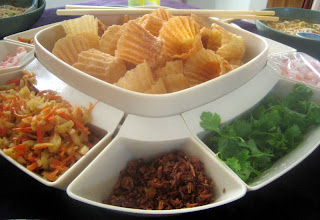 STEP TO STEP - HOW TO MAKE THE PIE TEE CUPS 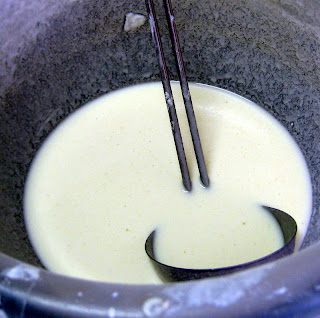 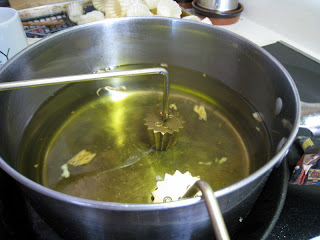 Put enough oil to cover the mould and heat to 350f. Put the mould in to heat 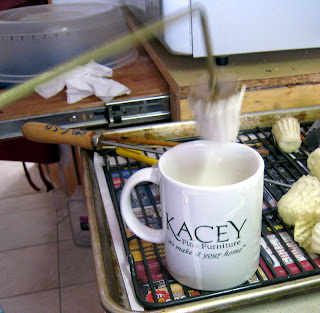 Pour batter into a coffee cup and when mould is hot, dip it on batter, make sure that it covers the whole mould but not to the very brim. 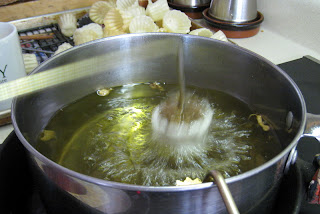 Put mould into hot oil and fry until golden brown. Shake mould to dislodge cup and if it does not come out by itself, aid it with a skewer. Fry mould until crispy but not totally golden brown. 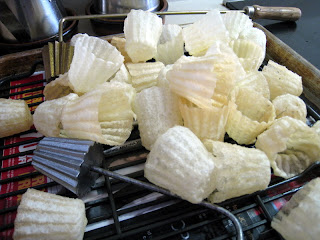 Remove cup from oil and leave on an overturned cake rack which has kitchen towel underneath to catch the dripping oil. 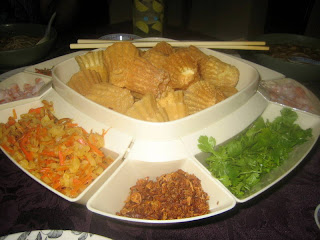 To prepare the Pie Tee Cups

Mix all ingredients together and leave aside for 30 minutes.

Heat the oil then put the Pie Tee mould in the oil to heat up.
Dip the mould into the batter and plunge back into the hot oil.
Fry until light brown. Then shake to remove the cup from the mould. Use a skewer to aid if the cup does not fall off the mould by itself. When dislodged, fry the cups until crispy.
Place on overturn cake rack which has the kitchen paper underneath, to drain,
Repeat until all the batter is used up.Refry the cups until golden brown and crispy, drain.
Pie Tee cups can be prepared ahead and kept in air-tight container until needed.


To prepare the FILLING


Put the oil in a hot wok and stir fry onion and garlic.
Add the rest of the ingredients, fry until vegetables are fairly soft and the sauce all soaked up by the vegetables. Leave them to cool. 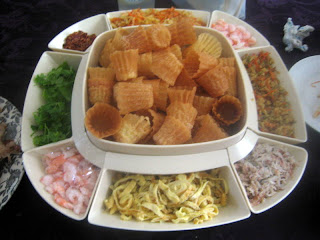 Place pie tee cups separately and guests are to fill the cups with the filling and garnishes.