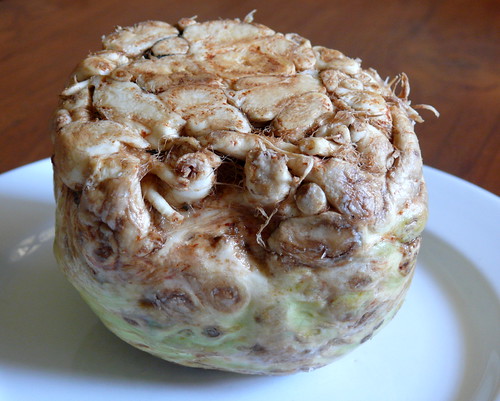 A celeriac
The celeriac is not a pretty veg. This root veg is quite unknown and I've never eaten it before or even seen  one until now. I was at the wholesaler Lim Lee Seng the other day and I crept into their giant storage rooms and saw this weird-looking veg which Ive seen in cookbooks, especially British ones, and immediately grabbed one. The price was hefty, RM35 per kg but I had to try it.
The celeriac does smell like celery but mildly so. As big as a coconut without the husk, this  veg is usually made into mash or gratineed. I liked Jamie Oliver's simple recipe where the celeriac is smashed, not mashed. This dish went well with some leftover London broil and sausages.  I stretched the dish by adding a couple of potatoes but they take longer to boil so you need to cut them smaller than the celeriac. 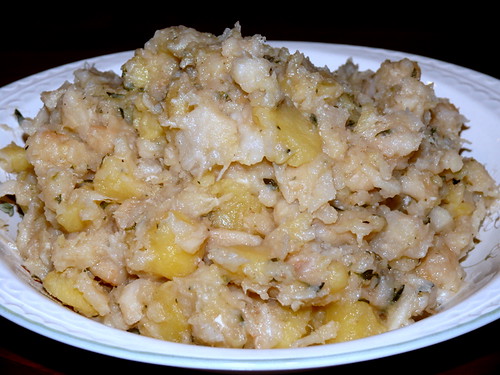 *after Europe, I use EVOO exclusively

1. Peel the celeriac and cut into small 2 cm cubes. Peel and cut the potatoes into 1 cm cubes.

2. Put the olive oil into a casserole dish or a pot and fry the celeriac, potatoes, thyme and garlic over medium heat until slightly golden, about 4-5 minutes. Season lightly. Add the stock and cover, turn heat down and simmer about 20-25 minutes until tender. Once in a while, stir the veg and add a spoonful of stock if needed.

3. Season again if necessary and smash the celeriac with a spoon or masher.