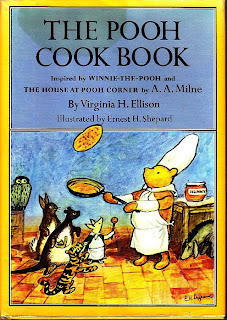 I just love Winnie-the Pooh. Well, actually, my big love is Tigger. I am not adverse to donning my Tigger suit on Halloween. I must say that wearing a Tigger suit puts reckless and unfriendly drivers on their best behaviour. Clearly no one wants to go home and tell their kids they wasted Tigger in the crosswalk. Even out of the crosswalk, a giant Tigger is pretty safe! 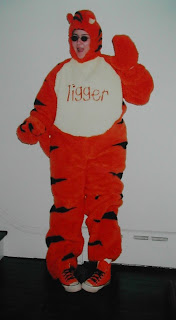 A.A.Milne who created Winnie-the Pooh and his bouncy sidekick, Tigger was never that enamoured of his creation. He wanted to be a "serious" writer known for serious writing and not for a story he wrote to amuse his son. Sorry, Alan. I believe Milne would be flabbergasted and way miffed we he to walk into a Disney store, today, not to mention what he would think if he saw me in a crosswalk! Among the many spin-offs of these characters, my favorite is The Pooh Cook Book, compiled by Virginia Ellison. The cookbook takes many of the smackerlings envisioned by Pooh and brings them to life in the kitchen. There is a large section devoted to recipes with Pooh's favorite Hunny. The recipes are easy enough to cook with kids near by. Here is the Cottleston, Cottleston, Cottleston Pie of Pooh's poem.


Bake the pie shell in a preheated oven at 425 F.
To keep the shell from sliding down the sides and puffing up at the bottom, prick sides and bottom well with the tines of a fork.

Line the bottom with a double thickness of cheesecloth and cover it with small clean stones, which you have gathered at the beach and washed, or with 1 inch of raw rice. Keep the rice and use it again and again.

Distribute the ham on the bottom of the baked pie shell.

Beat the eggs and cream with seasonings in a bowl until thoroughly mixed.
Pour on top of the ham.
Scatter the butter dots and cheese, if you use it, on top.
Set on rack in the middle of the oven and bake for 25-30 minutes until Cottleston pie has puffed up and browned.
Serve immediately while pipping hot. The book uses illustrations by Ernest H. Shepard,who illustrated the original Pooh books.

The characters came from Christopher Milne's nursery toys, though Shepard admitted to using his son's bear, Growler, as the inspiration for Pooh. Pooh was originally called, Edward. Somehow, I don't think Edward at Pooh Corner would have inspired such a following though I am rather partial to Growler-the-Pooh! 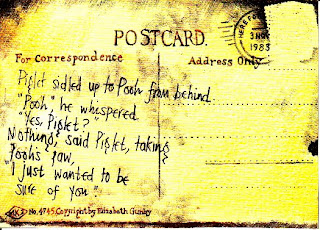 As Piglet just wanted to be sure of Pooh, you can be sure that The Pooh Cook Book is a winner.