To Mom And Dad's Home Province

This was a very last minute trip as it was almost Christmas and Yi was coming home for the holidays. We were invited to go for my half-bro's youngest son's wedding. I had never been there before and never met most of my relatives. To go or not to go? MAS helped make our minds up because they were promoting China for Enrich members and we had enough points for two.

Frankly we didn't see much of GZ because we stayed half an hour away in a newly developed area called Punyi. We also took off to Guilin for 3 days. All-in, it was a wonderful trip meeting relatives, listening to them talk about the hard times when the country was in reform, and seeing all of them doing so well now. I cherish the stories my cousins told of my Dad and his brother. Like a lot of overseas Chinese, they worked very hard to send money back so their relatives (not just their immediate family, but their uncles, aunties and cousins too) can have decent food and housing. What impressed me the most was how highly the older generation regarded education and when I look at how sucessful my nieces and nephews are now, I can see its because their grandparents and parents sacrificed to make sure they all got a university education. Chinese are nerds because its a Darwinian instinct.

Meeting all my cousins, half-sibs, nephews, nieces and their families was a very emotional moment for me. And meeting The First Wife. TFW is an amazing woman of energy, strength and quick wits, and I'm convinced the present generation of Ngs in Pingnan and GZ would not be where they are now if not for her. She did not join Dad, who had to flee when the Commies took over as he was a Guomintang planning officer, because she had to stay back to take care of Dad's parents and, get this, his dead brothers' families. She was locked up and almost killed for building a house with money Dad and 1st Uncle had sent her (considered too bourgeois). She survived by eating hot chilies she'd pick out in the fields when the soldiers took her,shackled, for nature calls. To this day, she loves chilies, and her skin is tight and smooth. 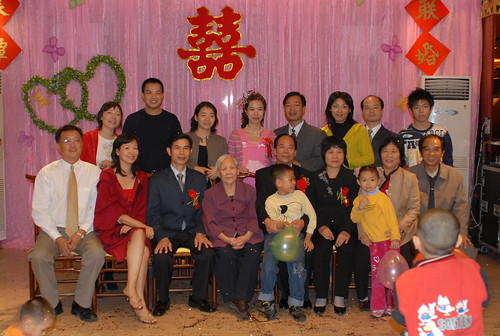 The Ng Clan; wish Dad could have been there. 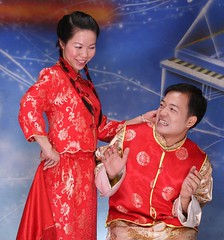 Famous Chinese saying: A man who doesn't fear his wife won't prosper." This guy will, greatly. 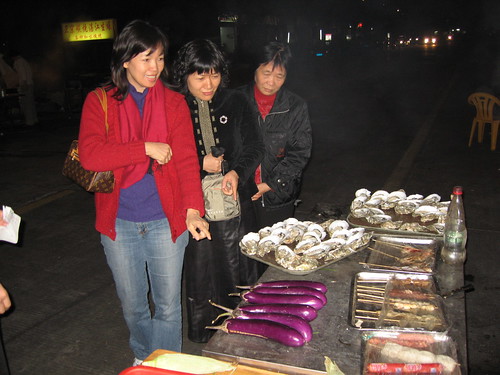 There's this street everybody must go to when in GZ to eat bbq everything, especially oysters. This was one of my most memorable feast. Everything was delicious: the lamb steaks and kebabs, the brinjals and chives (the latter strung on wooden skewers or stir-fried at the table), and best of all the garlic-chilies oysters which were only RMB20 for a dozen. They were fresh, plump and good-sized too, not too big like those Pacific oysters in Vancouver. Most of the food was cooked Xinjiang-style, with lots of ground coriander, cumin and other spices. Everybody sits in the street, closed to traffic, and bands of singers will come round to sing at your table for free. A dozen bottles of beer later, and you'll want to delay your flight home. 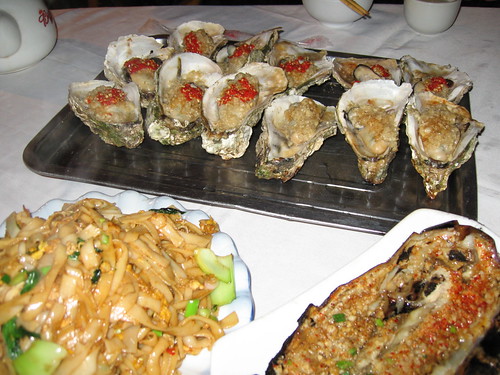 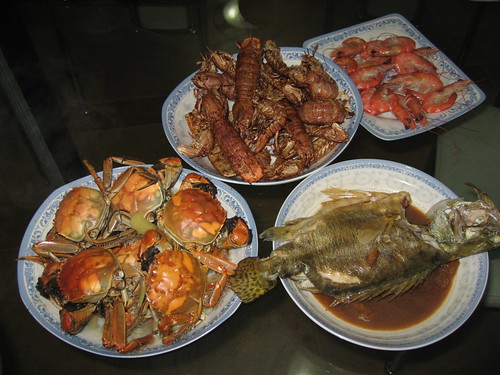 A home-cooked seafood spread cooked for us by my niece, Haiwu. That's Shanghai hairy crabs (the best crab in the world! Its flesh is juicy and delicate and the roe-oh, the roe- is creamy and tasty), praying mantis prawns, river shrimps and 'guiyu,' a freshwater fish that's very fine textured and considered 'high class' fish. 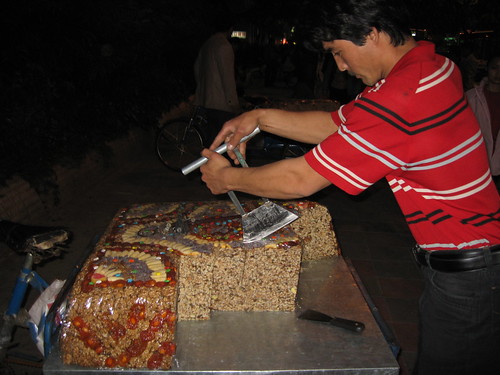 I almost caused a scene buying this. The guy said,"Che dou xao, mai dou xao" and I didn't really quite get it. The small block he gave me weighed like a ton and he asked for RMB80+, which I knew was way out. I had to buy it though because his, em, comrades surrounded us. The worst thing was, he called it 'he tao bing" (walnut cake) but when we got home, it was 95% peanuts and molasses. Don't buy it, even if you feel sorry for them, which was why I bought it in the first place. 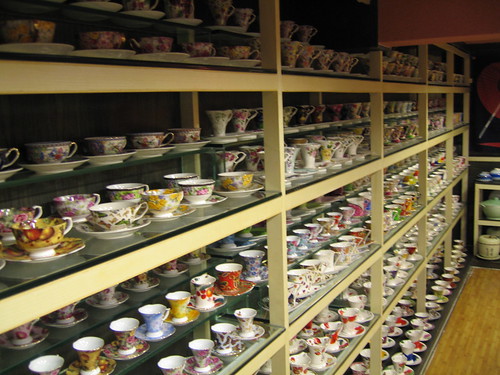 If you are in GZ, you must visit the astounding wholesale kitchenware centre, where hundreds of shops sell locally-made fine china for ridiculously low prices. We spent 6 hours there and only managed to check out about 15 shops. The place is so big it'll take days to cover every shop. It is the biggest wholesale kitchenware centre in the world and Kappa Bashi in Japan is child's play.